It's been a disappointing few days.

1. Ice. It's great in a glass, on a skating rink, or in Antarctica. It's most definitely not great on sidewalks and roads. Mother Nature, you seriously need to make up your mind. Snow or rain. Those we can deal with. Ice. Not so much.

2. See how vicious Daisy can be? Check out those fangs, the crazy demon eyes, and the way she uses her paws to defend herself against the big, bad daddy with opposable digits poised to strangle her. 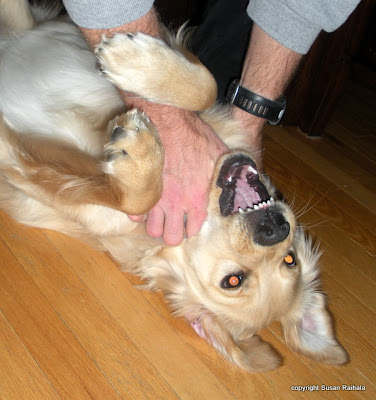 Daisy was attacked yesterday by two miniature schnauzers who broke out of their electronic fence and methodically attacked her butt. Despite the fact that she equalled the two dogs in weight and could have chomped them both with little effort, Daisy tucked her tail between her legs and bravely tried to hide behind me. While one schnauzer barked and harassed our front, the other would sneak behind and bite Daisy on the backside. She cried, yipped, whimpered, and looked at me with hurt eyes that said, "Why don't these dogs LOVE me?"

This must have been a shock to her because not thirty yards before we reached the schnauzers, Daisy had had a happy butt-sniffing visit with a 75-pound golden retriever named Rose. The two of them try to out-submit each other. It's really quite funny.

Fortunately, the mean schnauzers didn't break her skin, but poor Daisy had schnauzer spit all over her backside. Those yappy mongrels would be in low Earth orbit if George had been walking Daisy. I, however, sternly told them "No!" and moved Daisy away as fast as I could without running. Then...oh, I'm really stern, aren't I?...I left a stern message on their owners' answering machine and paced shakily for a while. Turns out their electronic fence collar batteries were dead. The owner apologized and said she was going to replace the collars with ones that also keep the dogs from barking (good news because they are a serious nuisance at 6:30 in the morning).

So I guess the viciousness with which Daisy plays doesn't translate to the real world. Or perhaps she was picking up on my own viciousness when confronted with two attack schnauzers.

3. Word Mole. I hate this game. I just discovered last night that it's NOT like Boggle. You don't have to make sure the letters are adjoining to form words; you can touch any letters anywhere on the screen to form words. This rocked my world, and not in a good way. Within just a few minutes, I'd beaten my top score by hundreds of points and could have kept going indefinitely. It's not fun anymore because it's just too easy. What's the point? I guess I should be grateful. Instead, I'm just mad.

4. I had two different companies solicit interest in my blog on the same day, and neither struck me as worthy of follow-up. Why oh why won't Starbucks or Barnes and Noble or LLBean offer to give stuff away to my readers?

5. I tried the Thai Chicken Salad at Panera for lunch yesterday, and it's not good. I ate it because I paid for it, but it's just not good.

Now Panera won't ever offer to give stuff to my readers either.

6. I scheduled my annual mammogram for February 14. 'Cause nothing says romance like not wearing deodorant and getting your boobs squished.

It's a good thing all this didn't happen last week when I had PMS. If it had, I'd be curled up in the fetal position on my bed sucking my thumb.

See. I knew I'd find a bright side. It could always be worse.
Posted by Susan Raihala at 9:10 AM