The most important picture of the day: 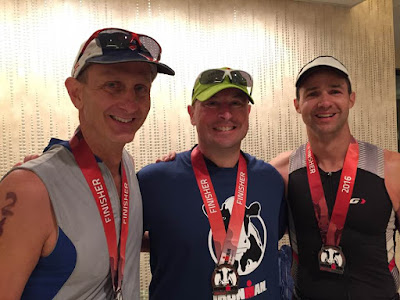 Dell Finney is still out on the course but estimated to finish this year. I so wish I had the energy to go watch him and cheer him on, but as the saying goes, stick a fork in me 'cause I'm done.

It has been an amazing day, full of joy and fun, a friendly clown and a very docile boxer who sniffed my feet, Patriot Day observances, and an iPhone battery that lasted just long enough. Good times.

Thanks for following today's adventure. All the well-wishes and congratulations are very much appreciated.

The marathon has begun! All three of our intrepid Springboro racers are on the marathon. Here's an update of times.

George's bike time was 6:29:53, and he's pacing on the first four miles of the run at about 12 minute miles. That's awesome!

So far, so good! We are almost five hours into the race and here's how things stand.

Rob Ekin came out of the water at 1:14:23 and did the first 39.5 of the bike at a slightly better pace than George. The two of them are very close so far, but Rob is wicked fast on the run, so that won't last!

John Seminary came out of the water at 1:24:49 and might have had a flat or some other trouble in the first 39.5 on the bike, as his second split pace was unusually low. Hopefully at the next split we'll see that he's recovered from whatever snafu affected the second split time.

I'm keeping watch on the times through an app on my phone, but you can follow along at the Athlete Tracker online.

Ironman Live coverage will be available later. Follow the link and you'll see it when it's available. The Live Blog is on the sidebar of the page, and it's mainly following the pro women but occasionally has shots of volunteers and such as well.

Here are some pictures from this beautiful, beautiful morning in Madison.


After the start, I dashed to the hotel to drop off George's triathlon bag and bike pump, and stumbled across a very somber and moving memorial service in front of the Capitol. The contrast between the loud and high-energy start of the race and this quiet, peaceful memorial was striking. We need both, don't we, after 15 years. We don't forget, but we will not stop striving. Thank you, first responders and military service personnel. Thank you.


After the guys were safely on the bike, Rob's parents, his wife, John's wife, and I went to the Old Fashioned for brunch, and we were met by Marcia, one of my blog readers. I'm so grateful she chose to come cheer George on this morning...and it was so fun meeting her and having a meal together. Thanks, Marcia!

On the Eve of the Race


If you're reading this in email, be sure to scroll down for Saturday's earlier posts.

Feet up, killing time until lights out. Check.

We will rise at 4:00 central time in the morning. George will prepare his nutrition for the day, eat a honey-and-peanut-butter sandwich, drink a Coke, and try not to barf from nerves. We will head down to the start around 5:15. At 6:15 or so, he, Rob, and John will have wetsuits on and walk to the swim start.

It takes a lot of time to get 2,700 or so athletes across the timing mat (which is maybe 12 feet across) and into the water. The professional athletes will start at 6:45, and everyone else when the cannon goes off at 7:00.

If you're the praying kind, please pray for a safe race for everyone tomorrow...racers, volunteers, spectators, random people who get caught in the chaos.

There will be a live feed on the IM website of the finish sometime in the afternoon, and you can watch each finisher cross the line. I will let you know an estimate of the time George, Rob, and John will cross, as well as Dell Finney, in case you'd like to watch.

And now we are off to sleep and dream about cow medals and Mike Riley saying "You are an Ironman!"

Past Performance and Call for Q&A

Repeat performance at Ironman races is extremely common. This is George's eighth year at IM Moo, and he's done Mont Tremblant and Lake Placid, making this his tenth attempt in 12 years.

Just let that roll around in your head for a minute. Tenth attempt in 12 years.

Let's revisit those previous nine races in George's own words (slightly edited for PG-13 rating). For those who don't know, DNF stands for "did not finish" and PR for "personal record."

Ironman Wisconsin 2005:  "DNF at start of second lap of run.  Horribly hot, windy day that sucked.  Cramps crushed me on the bike."

Ironman Lake Placid 2007:  "Ambulance ride to the med tent at mile 14 of the marathon when I couldn’t walk straight.  2 IVs later and I felt much better.  Couldn’t believe I had another DNF."

Ironman Wisconsin 2010:  "Wheels came off at mile 14 of the marathon.  Bad year of training; burned out on Ironman, and just didn’t have the mental fortitude to finish a race I should have finished.  DNF."

Ironman Wisconsin 2014:  "Complete crap year of run training; no running for month of July due to injury, longest training run was 5 miles all year.  Just happy to finish with a 14:15."

Ironman Mont Tremblant 2015:  "Another relatively crappy year of run training, although better than 2014.  Had hopes of going around 13 hours, but the day was incredibly hot and humid, and the bike course difficult. Still, best finish since coming back to Ironman in 13:57."

So let's see what Ironman Wisconsin 2016 will bring. The weather looks to be ideal, with forecast calling for sunny skies, high of 75 degrees, and wind 5-10 mph. George is now in Sloth Mode. He tries to do nothing and keep off his feet the day before a race. Here he is, surrounded by electronic entertainment and definitely channeling his inner sloth. 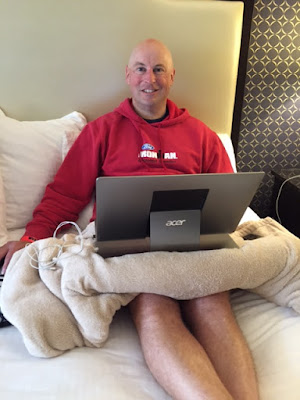 Since he's slothing it, if you have any questions about Ironman, training, or general lunacy, please post them in the comments, and he'll try to answer them!

Random Observations on a Friday at IM Moo


1. George is doing this year's race with John and Rob, two triathletes from our hometown. It's motivational to have friends doing the race, too.


All three simply must finish because the finisher medal is outstandingly cool this year. It looks like the cow logo on the race banner. 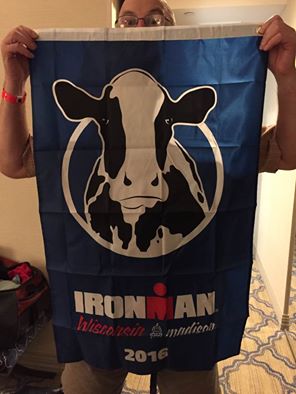 The only way this year's medal could be better would be if it looked more like this: 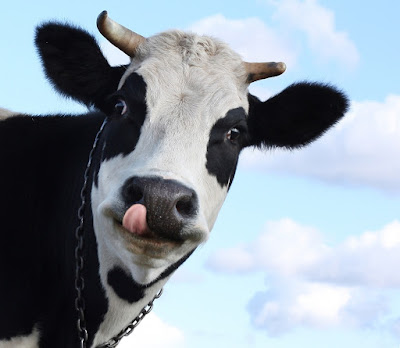 But even without the tongue, it's a cool medal.

2. Signing up for most Ironman races really only has two prerequisites. You need to be kinda crazy and register before the race fills.

To finish, well, that requires months of serious training, smart nutrition and hydration, luck enough to avoid injury, and a whole lot of determination. This year, Dell Finney wins the prize for most inspiring story I've heard so far, and he exemplifies that determination.

I saw Dell yesterday at the lake and noticed how random strangers were walking up to him to shake his hand. The beard and tats get him noticed. Turns out he's quite famous on the IM Moo Facebook page. He started and did not finish the last two IM Moo races, and he's back this year for a third attempt. I'm totally on Team Dell and will track him on race day. I really, really want to hear official Ironman announcer Mike Riley call out, "Dell Finney, you are an Ironman!"

3. George, John, and Rob attended the mandatory race meeting today and had an amusing few minutes while an Ironman spokesperson tried to convince the dirty-minded crowd that the new section of the bike course resembles an upside-down Florida. Decide for yourself what the northwest loop of the course looks like by taking a look at the map.

4. On a much more serious note, this weekend marks the 15th anniversary of 9/11. George and I noticed a giant American flag being raised at the Wisconsin Capitol building this evening. It must have been a trial run for an official raising since the flag didn't go higher than in this photo, but wow. That's a big flag. I hope we get to see it raised fully and rippling in a gentle breeze later this weekend. 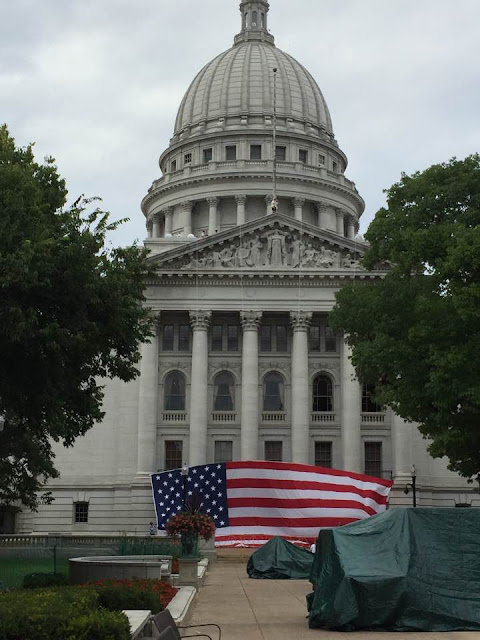 A Stroll down Memory Lane

The problem with blogging something that happens annually is coming up with fresh material, a new perspective on the same old thing. I've written lots about Ironman before and thought I'd share links to my favorite posts from years gone by for those of you who are new to Ironman lunacy or who simply want to take a stroll down Memory Lane.

When There Was Still Hope from 2010 (George DNF'd that one)

Now I'm off for fresh material from this year's IM Moo.
Posted by Susan Raihala at 12:16 PM 6 comments:

A week ago, an odd situation came up around this year's Ironman Wisconsin, and George said to me, "If you don't want to go, I understand."

"Thank GOD! I can't do this race without you!" he exclaimed.

He's right. Well, sort of. Technically, he could do it without me, but it would be much, much harder. For one thing, after he raced 140.6 miles, he'd have to retrieve his bike and all his heavy transition bags and hike them to the hotel all by himself.

This chore is apparently so hard in the utter state of exhaustion at the end of a race that racers are seriously tempted to leave all the gear behind...including the $6,000 bicycle.

"After all," the devastatingly exhausted racer tells himself or herself, "I'm never, ever doing this race again."

Because they are lunatics.

At least, that's my conclusion.

Fortunately, they are the sort of lunatics you want to have around for entertainment value, not the terrifying sort that try to get you to join them in their masochistic shenanigans. After all, someone has to stand on the sidelines and cheer them on.

If you'd like to follow George and a few of his lunatic friends who are tackling Ironman Wisconsin (affectionately referred to as IM Moo), stick around Questioning for the weekend. There will be photos and videos and jokes and all sorts of amazing physical accomplishments by racers...and even by a certain blogger, who will heroically retrieve George's heavy bags and nasty, sticky, sweaty bicycle and schlep them to the hotel while he's trying not to pass out or vomit on the marathon course.

I do this because I love him and, more importantly, because abandoning a $6,000 bike in the Monona Terrace parking lot simply isn't an option.

A note to email subscribers...if you wait for the posts to arrive in your mailbox, you'll miss some of the fun. On Sunday, I'll link to the live feed of the finish line and keep you posted during the day about George's progress. It'll all be old news Monday morning. Check in and refresh the page if you want to follow along.
Posted by Susan Raihala at 10:26 PM 4 comments: