Today, I am grateful for the return of Bloom County. Berkeley Breathed just made all our lives a bit happier with Opus, Milo, Cutter John, and the rest of the gang in our Facebook feeds every morning.

Today I am grateful for my beautiful sister...for so very many reasons. 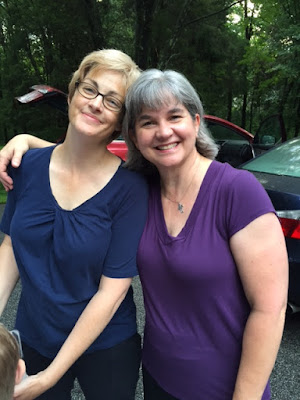 What are you grateful for today?
Posted by Susan Raihala at 7:56 AM 3 comments:

Why I Won't Read the "New" Book by Harper Lee

Lots of people are excited by today's release of Go Set a Watchman by Harper Lee. From the beginning of the media hype, however, a small but strong sense of unease rested somewhere between my bibliophile's heart and my critic's head.

As a trained literary critic, I've read plenty of books because I had to read them. Most were classics, and my critic's mind often adored them. Gravity's Rainbow, Ulysses, The Great Gatsby, Wuthering Heights, et.al.: great books. A few classics didn't excite me, even though I could appreciate why they were classics and why reading them was good for my mind. (Yes, everything by Ernest Hemingway and Thomas Hardy...I'm talking about you.)

As a shameless bibliophile who's been reading all sorts of books--great, merely good, downright bad, popular, pure fluff, genre fiction, chick lit--since she was three, I find certain books simply speak to me in ways that run too deep for words, and some characters influence my thought and feelings in some primal place in my soul.

As you might imagine, the split personalities of my reading self get into arguments all the time. My brain is a very strange place.

To Kill a Mockingbird knocked me flat. I read it for the first time about ten years ago when I realized that this classic had flown under my reading radar, and I felt shame that all I knew about it had been gleaned from short, random snippets of the movie caught on cable. As a Southerner, as a compassionate human being, as a devoted lover of language, I fell hopelessly in love with Atticus Finch and Harper Lee. At a time when hate ruled hearts, just five years after Rosa Parks sat on that bus in Montgomery and three years before the church bombing in Birmingham, a white Southern writer sent Atticus Finch out into the world, a man who did the right thing even though it wasn't popular or comfortable or even safe.

Atticus gave me hope that we could figure this out, a hope I still cling to today in the wake of the murders of nine human beings in a church in Charleston. A hope we all need to cling to.

Stories shape us in almost magical ways, and they talk to one another. To Kill a Mockingbird converses in my mind with all the books I've read by African Americans about race. Maya Angelou, Richard Wright, Alice Walker, and Harper Lee are allies in making art to show hate and evil for what they are and break them, to heal a culture hurt by them.

Many writerly voices, united in an inter-textual conversation on life and the human condition, shaping thoughts and feelings...that is what reading literature is (or should be) all about.

When I listened to Maureen Corrigan's review of Go Set a Watchman yesterday on NPR, I realized that the magic would never survive, the inter-textual conversation in my head would shift forever, if I read about an Atticus who's lost his way. I'm so grateful to Corrigan for doing her job as critic and expressing so eloquently why I shouldn't read a book.

I choose hope. I choose the Atticus of To Kill a Mockingbird.