We arrived in Madison a few hours ago and checked into our ideally-situated hotel. The room is awesome...a corner room with a curved wall of windows on the third floor. I'd need a wide-angle lens to show you. 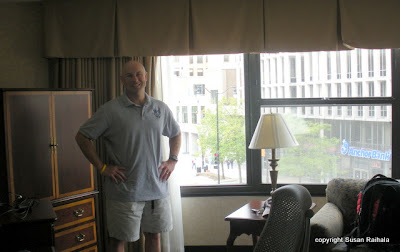 We have a view of the Capitol building and, more importantly, Starbuck's. Well, you could see Starbuck's if it weren't for that tree, but trust me, it's there. I've already had a mocha. 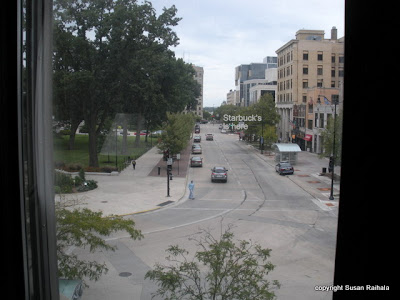 George registered, a process that's much easier on Thursday than Friday, when everyone who couldn't come today tries to register. He sailed through, signed the waivers, got weighed, picked up his race chip, transition bags, and such.

Below is a picture of half the parking lot that will be the home of about $5 million dollars worth of bicycles on Saturday. 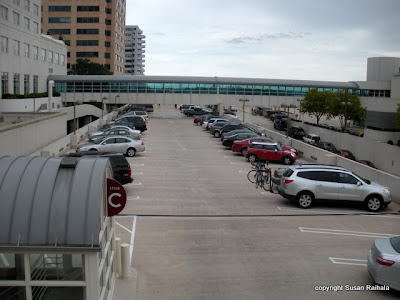 The scope and scale of this race astounds me every year. Almost 3,000 racers are signed up this year. We'll see how many start Sunday morning.

I bought a Support Crew T-shirt to wear on race day. George refuses to buy any Ironman gear until after the race. He's very superstitious about the race and doesn't want to jinx his chance of finishing by being all optimistic.

He does, however, have an unnatural lust for this bike. I just asked him to tell me again the name of the bike, and he replied with something that sounded vaguely Latin with overtones of Japanese and involving the phrase electronic shifting, I think. If you really want to know, I'll ask him to type it in the comments. Whatever it is, he wants it. 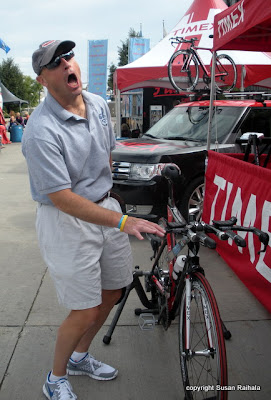 He told me that he would not mind in the least if I bought it for him on race day.

I love him so much. He really knows how to make me laugh.
Posted by Susan Raihala at 9:12 PM