Reader Jayne asked why the athletes pee in their wetsuits. I have no idea. Clearly they celebrate the fact with giant banners. Last year, our friend Keith, a former Navy Seal, peed in his wetsuit while standing next to George before starting their practice swim on the Friday before the race. They even briefly discussed their experience of the obligatory pee. I personally think it's gross and can't imagine doing it, but then there are good reasons why I'm not in a wetsuit in the first place, and I'd never tell a Navy Seal what he should or should not do because heaven knows how many ways he could kill me with his bare hands if he took the notion.

Jayne, I promise to ask George if there's any reason for it and get back to you.

My uncle Darius has now quit reading my blog forever. He hates the word pee.

Well, back to the race. George started his marathon looking good but vowing he's not going to kill himself on the run. What a relief. He spotted me yelling at him on a long straight-away and immediately slowed down so I could take pictures and he could talk to me. 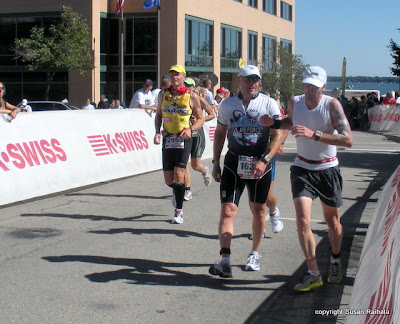 I like that he wore his old Air Force cycling team jersey for this year's race. He rode with the AF team for RAGBRAI, a week-long, 600+ mile ride across Iowa, years ago. It makes me proud to see him wearing the flag on his sleeve the day after 9/11 observances. One day, I need to write about 9/11. But not yet. It's still too fresh. 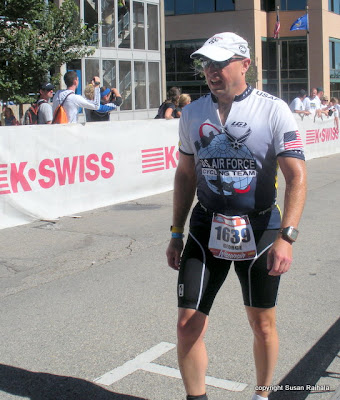 How many 45-year-old men would publicly refer to their wives as Honey-Bunny? I'm a lucky woman. 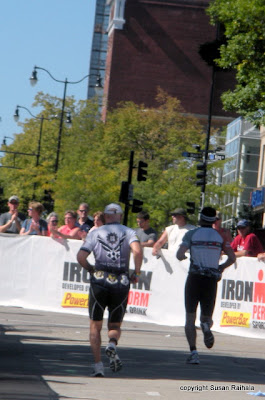 And there he goes.

George finished his 112-mile bike ride in 6:09, which is just six minutes slower than last year. Add that to the longer transition times and he's about 12 minutes off last year's pace. Given how interrupted his training was this summer, I think he's doing GREAT! His first bike split put him at a similar pace to last year as well. If he can maintain that, he should be finishing a little before 8:00 central tonight.

Now, allow me to introduce Mike Reilly, the voice of Ironman. He started announcing this morning at 6:30, and he won't stop until midnight tonight. The man is a rock star in triathlon. Mike is the one who makes all the pain, all the suffering, all the sweat and cramps and blisters worth it. He's the one who makes each person's finish official by shouting joyfully to the world that "You are an Ironman!" 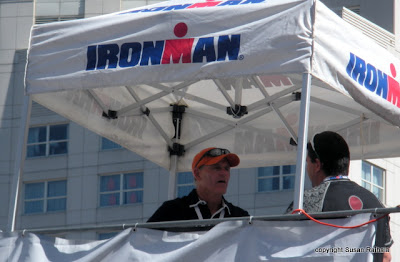 Check out the streaming video HERE, and you'll hear Mike's voice calling out each Ironman finisher's name and home town. How I pray he gets the chance to butcher our name again this year when he says, for the fourth time, "George Raihala, you are an Ironman!"

Then, it will all be worth it.
Posted by Susan Raihala at 4:38 PM