Don't let this picture, taken at 5:30 this morning before the swim start, fool you. George was very nervous this morning. His tummy was in knots and he wasn't sounding very positive or optimistic. I tried some motivational talk, and he told me to shut up. Well, not those words, but that message. I seriously hope he perked up when he hit the refreshing, 68-degree water, or today will be not just merely painful, but very painful. 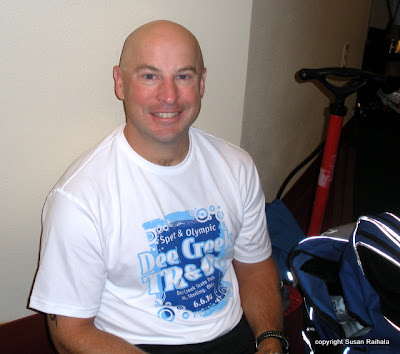 And please note the red bike pump in this picture. I carried that around for a while this morning, just like a whole bunch of other Iron Mates, Iron Sherpas, and Support Crew for the lunatics racers.

As we walked out to the swim start, we overheard a very upset athlete yelling at someone on the phone, asking where his support crew was. I hope he got in the water on time.

George may have felt somewhat better when I snapped this around 6:40 AM just before he headed into the water, but it was hard to tell. He wasn't saying much. He KNOWS what he's gotten himself into. This is Ironman attempt number SIX, for heaven's sake. 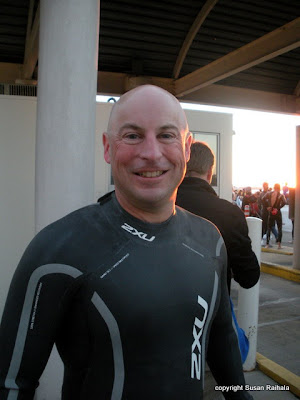 This year's start had me identifying with this guy...George and I saw him perched atop a building near the Capitol yesterday. The crowd was worse than last year, and I had to climb a wall to see over the heads of the four-person-deep mass near the lake wall. 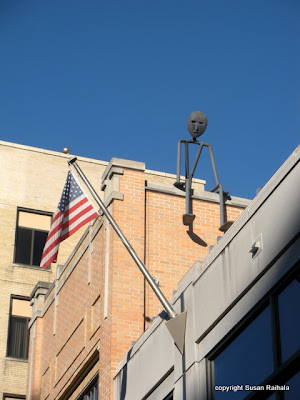 And in case you were wondering, this banner hanging off the helix said, "Wave if you're peeing in your wetsuit!" 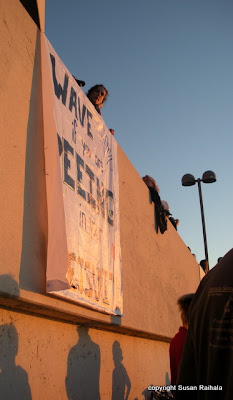 The professional triathletes start at 6:50, and the rest of the racers start at 7:00. This year, over 2,600 started, and 1,200 were Ironman Virgins. That's a lot of inexperience in the water. It's easy to panic in the press of bodies, but there are divers under water and lots of kayaks, small boats, and sailboards to rescue anyone needing help.

That mass start resembles salmon spawning. George said he was going to be close to shore, out of the main press of bodies, but it looked like lots of other folks had the same idea. I took this picture from my perch, over the heads of the people at the wall. The closest racers looked really close! It'll be interesting to hear how the swim went for George this evening. 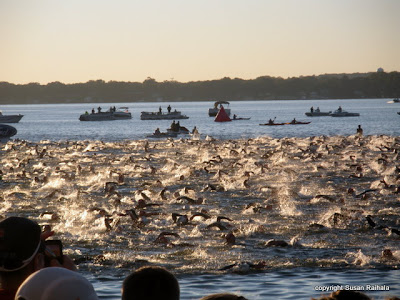 His swim time was a bit better than he expected. He came out of the water at 1:19, and then had a 13+ minute transition time. He's going to hate that long transition, but he looked really good as he ran toward his bike. I was perched on the walkway right above him, and he heard me and waved. So glad about that. Last year, I screamed and he never heard me. Oh, George's call sign in the military was Spot, so I generally yell out Spot. In case you're wondering why I labelled him Spot in this picture.... 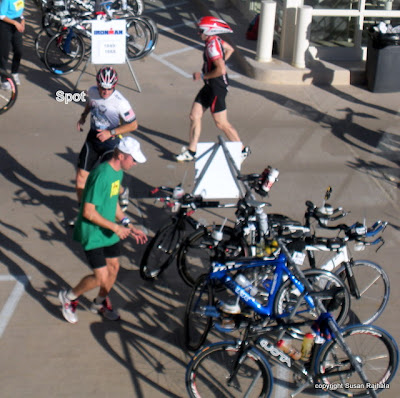 He headed out looking strong, and now it's a waiting game. 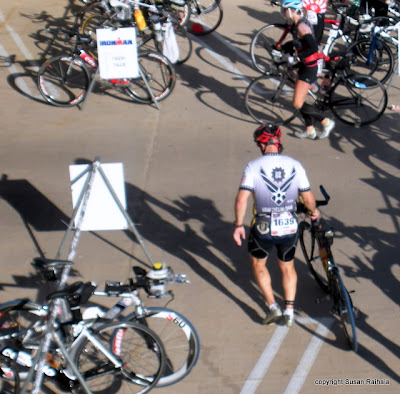 If you want to follow his progress today, you can do so HERE. His bib number is 1639, or you can search by his name. George Raihala. Not Spot.

Later today, I'll post a link to streaming video of the finish. If you've never watched an Ironman finish before, it's an incredibly moving experience. Mike Reilly, the official voice of Ironman, calls everyone's name, tells where they are from, and then yells, "You are an Ironman!" Oh, I get goosebumps typing that!