A Peek into the Past

While visiting my mother last week, I went through some wonderful memorabilia from my grandparents, including a pamphlet from my grandfather's time with the Royal Canadian Air Force, a flight log of his time in the China-Burma-India theater of World War II, and an article from the Shelby Daily Star newspaper, reprinted in the early 1980s but originally published in the 1930s. 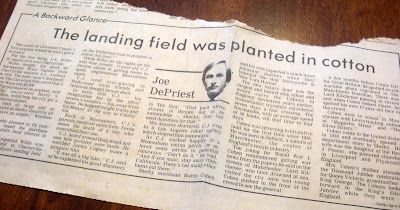 The article contains three different bits of local news. First, a story about my grandfather D.L. Willis, who was the first person in Cleveland County to own an airplane. Of course, there was no airport at the time, so Papa had to use a field near Cherryville after the Byers field was planted in cotton. Oh, the challenges of early aviation!

The third story is about a trans-Atlantic trip by Harry Cohen and his wife to visit their native Great Britain and includes a lot of name-dropping of famous people with whom the Cohens (or their relatives) had passing encounters. The best story in the article, however, is buried in the middle. I'll transcribe it for your entertainment.

While Willis set his sights on the wild blue yonder, 17-year-old C.J. Deaton aimed at getting home to quiet, unglamorous Mooresboro again.

C.J. went star-gazing in Hollywood while friends and relatives thought he was dead.

In early 1935, C.J.--his imagination fed by the silver screen's wonders--ran away from home. He hopped freight trains and hitchhiked all the way to California.

Back in Mooresboro, C.J.'s parents received news from Texas about the death of a boy who resembled their son.

C.J. nosed around Hollywood and saw how pictures were made. He watched James Cagney make a gangster film.

"It was all a big fake," C.J. said as he explained his great discovery to The Star. "That part where Jimmy is thrown out of an automobile--shucks, they just used dummies for that."

His dreams shattered, C.J. went to a Los Angeles relief agency which steered him homeward.

As C.J. worked happily in a Mooresboro cotton patch, he offered some advice to potential runaways. "Don't do it," he said. "And if you must, stay away from California. There's too many other bums out there."

C.J., wherever in this world or the next you are right now, thank you for your charming adventure. You're swell!

Which leads me to ask a question: what "great discovery" have you experienced that made you say "shucks"? What discovery caused you to lose a bit of innocence? For four-year-old me, it was learning that little people do not live in traffic lights. It was so much nicer and more comforting to believe that actual, very small people were taking care of traffic and keeping everyone safe.
Posted by Susan Raihala at 1:33 PM

Email ThisBlogThis!Share to TwitterShare to FacebookShare to Pinterest
Labels: history