Things on Thursday: A Love Letter

Looking back through old family scrapbooks can be quite illuminating. You can uncover amazing treasures that give you a glimpse--just a glimpse--into the past.

My grandmother, Ann Willis, received a two-page letter dated October 12, 1943, when my mother was just over a year old, and signed by someone named Johnson. 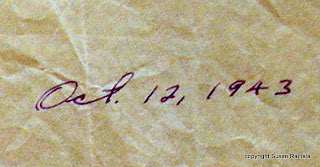 The letter passed the Army censors. Johnson was a friend of Ann's husband, my grandfather, D.L. Willis. 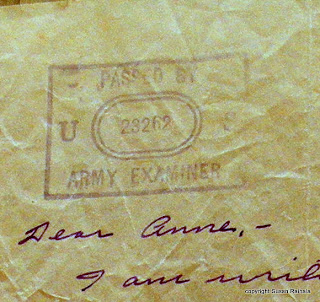 Here's a photo of the letter, the second page of which is permanently glued into the scrapbook (woe is me!). 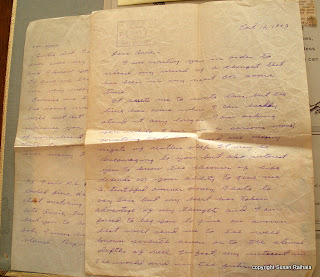 Here's a transcript of the letter:

I am writing you in order to release my mind of a thought that has been in my heart for some time.

It hurts me to write this, but the time has come when I can hardly stand it any longer. I am asking you while I am in a serious mood, something that has caused me many nights of restless sleep. It may be discouraging to you, but also interest you to know the pleasures of life depends on your ability to give me a truthful answer. Honey, I hate to say this but my heart has taken advantage of my thoughts and I am forced to beg you to give an answer that will send me to the well known seventh heaven or to the eternal depths of hell. In fact, my interest in this world and in the future depends on you.

Little did I know that such would ever cross my path in regards to you, and I know you will be kind enough to give me the answer that will make me very happy or miserable.

Promise me that you will consider the issue with an open mind and not let former loves or courtships influence you. Honey, from the bottom of your heart, I want to know the truth. Do you think Lil' Abner will ever marry Daisy Mae?

P.S. I saw D.L. the other day and he looked fine. He gave me your message about snatching both my hairs out. Too late, Annie, the rigors of war have beat you to both of them. How's that baby. I miss her slobbering on my blouse. Bye now, J


When George first perused this scrapbook, he read this letter with huge eyes and shocked expression...right up to the line about Lil' Abner. He said that, as he was reading it, he couldn't believe Grandma had put the letter in a scrapbook for all to see. Those of us who knew Grandma well expected some sort of punch-line, though. Nor are we surprised that she was threatening to pull out Johnson's remaining hair. Papa always teased her that she had yanked out all his hair, too.

I asked my Mom if she knew anything about Johnson. She said no. She believes there is a photo of him somewhere, but she's not sure. If there is, it's likely not labelled. Johnson is probably one of the nameless faces in the many war-era photos that my Grandmother put in albums. The Greatest Generation is becoming the Lost Generation. But this letter gives us a glimpse into that time. And that makes it a precious thing to hold.
Posted by Susan Raihala at 12:06 PM