For the record, I am most definitely directionally challenged. Over the years, I've been lost a number of times and am usually quite capable of getting myself unlost. Such occasions don't cause me distress at all, except when I somehow got lost in the Chicago projects.

That is a very long story.

Anyway, yesterday (Wednesday), I got a call from Camp Kern, a YMCA camp near Lebanon, Ohio. The entire fifth grade at Nick's school had been there since Monday hiking and petting snakes and learning about nature and getting dirty and dancing around campfires and sleeping in bunk beds. The students were scheduled to return to school early afternoon on Wednesday.

The phone call was from the nurse, who informed me that Nick was sick. I shall not give details, but the poor boy needed to be picked up and brought home.

In all the paperwork sent home about camp, there was a map showing very clear directions. I'd never been past the camp before, but George rides his bike around that area all the time and knows it well. I figured with this very clear map, I'd have no problem finding the camp and picking up my sick boy.

Oh, how wrong I was. You see, it's very, very wrong, when reading a map, to assume that the first interstate you come to is the RIGHT interstate. In fact, one should absolutely and without fail read the road signs and not mistake Highway 42 for Interstate 71. Especially when there is an immediate left just past Highway 42, as there is just past I-71 on the very clear map guiding you to your destination.

That immediate left (the wrong one, it turns out) forks into Wilmington Road and some other road whose name I forget. Anyway, I started by taking Wilmington Road because a big sign with a canoe on it pointed that way. But after driving about five miles, I crossed the the Little Miami River. The map clearly shows that Camp Kern is BEFORE the Little Miami, so I knew I'd gone too far. But as I backtracked, I couldn't find Camp Kern.

At that point, I suspected that I had taken the wrong fork, so I backtracked and took the other fork. After going over four miles, I realized that, indeed, I was hopelessly lost.

My first thought was that, undoubtedly, Camp Kern is listed as a point of interest on the Garmin GPS we bought for our trip to Minnesota in June. My second thought was that this realization was pretty useless to me because the Garmin was in my coat closet at home.

I realized that things had gone wrong back at the "left past I-71" and I needed to backtrack. I was, however, feeling the push of time...my sick son was waiting for me. So rather than backtrack all the way, I pulled over and called George, not really expecting him to answer. But he did. What ensued was several minutes of debate as he searched Google maps and I told him I where I thought I'd gone wrong (without remembering helpful things like street names). I really wish I'd tape recorded this conversation for your entertainment because it was so clear that George and I were speaking completely different languages: he, the language of the former Air Force navigator, and I, the language of the directionally challenged.

Finally, I got to an intersection with street signs, and told him where, indeed and at that moment, I was.

He replied that it wasn't possible for me to be at the intersection of Emmon and whatever the name was.

Yet there I was, hopelessly lost yet still perfectly capable of reading street signs.

Then he asked me if I was heading west or south.

Sorry. You see, all I can do is guess on cardinal directions. The only time in my life when I felt comfortably oriented to the compass was the two year we lived in Wichita, Kansas. HELLO! That's a well-planned city on a grid. Unfortunately, I grew up in Charlotte, North Carolina, where Queens Road intersects Queens Road and unless you're in downtown, nothing is on a grid. Cardinal directions were simply no help in navigating in Charlotte, so I never really had much use for them.

George, on the other hand, spent too many years telling military pilots where to go and plotting targets for bombs. Directions HAD to be right, so his brain is hardwired to know where he is in space at all times. To him, asking which direction you're driving is a complete no-brainer. To me, the only answers come from wild guesses and trying to figure out where the sun is.

Do you see where I am going with this?

George had me turn left and found me on the map at the next intersection when he asked if there was an animal hospital on my right. YES! THERE WAS!!!! I fell instantly in love with Google Maps. At this point, he comforted me by saying, "Well, you're not as lost as you could be." He vectored me to the right road and I arrived at Camp Kern an hour and a half after leaving the house.

It took me and Nick less than a half-hour to get back home.

Nick had no problem finding his way to the sofa, where he curled up and watched movies with Daisy Doolittle. 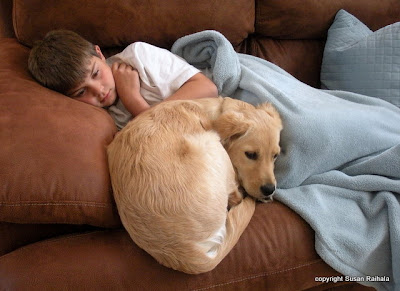 Poor Nick suffered for my directional incompetence, but I'm happy to report that about three hours after I shot this photo, he was fully recovered and running around the house making pewwing noises while pretending to shoot mummies.

Last night, George had to call up Google Maps and debrief the mission with me. He wanted to know where in the world I had been. We realized that Ennon Road has several names, not all of which were showing up on the scale map George had been using. He was really quite kind about it, though, and I suspect it's because the situation is similar to his comment about Daisy this weekend and how dogs make us feel "superior and loved at the same time...it's a win-win situation." Well, he's directionally superior to me and loved by me. Win-win.

1. It is good for a directionally challenged individual to a) have a cell phone and b) be married to a former navigator. (Thanks, honey!)

2. It is even better for a directionally challenged person to take a Garmin navigation system with them whenever they go someplace for the first time so they don't get lost and look like a complete idiot to their loved ones and the world.

Care to share a time you got lost? How did you get unlost? Do you get upset when you're lost or are you, like me, rather accustomed to the situation?
Posted by Susan Raihala at 2:21 PM