If you've been following Daisy's progress closely, you might remember that her breeder told us she wouldn't be "unsensible."

You can't tell Daisy anything. In people years, Daisy Doolittle is about three years old. Whoever said twos are terrible never had threes. Threes are WAY worse. And they have no sense at all.

First, we can't turn our backs on the table when it has food on it. She absolutely views any food on the table, unsupervised, as free for the taking, despite repeated commands of "OFF!" and "NO!" I left a stack of Pringles on the table Thursday and turned around to replace the canister on the counter. When I turned back, she had the whole stack in her mouth, crunching loudly. George is threatening to run a bead of hot sauce around the table to scare her off.

We have also repeatedly removed socks from Daisy's mouth and told her firmly no. She wants the socks and couldn't care less that we disapprove. The other day, I was interrupted from a task by the need to remove a formerly-clean sock from Daisy's mouth. I put the sock on the kitchen table and finished my task in the kitchen. When I turned around, Daisy was STANDING ON THE KITCHEN TABLE--ALL FOUR PAWS--WITH THE SOCK IN HER MOUTH!

Sadly, I didn't take a picture. Instead, I yelled at her and got her off the table. And took the sock out of her mouth. Again.

I replaced the sock with this raccoon. 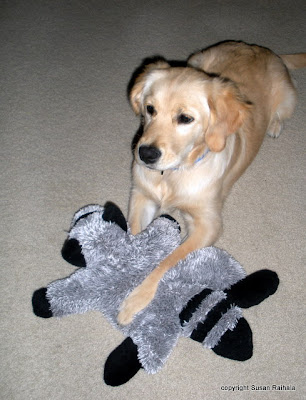 Daisy loves the raccoon almost as much as she loves socks. She squeaks the squeakers in its head and paws (God, save me from the squeaking!). She throws the raccoon up in the air. She shakes it to death. She prances around with it in her mouth. Then she shakes it some more. Note the flopping of her ears in this picture. You have no idea how hard it is to get action shots of this dog. 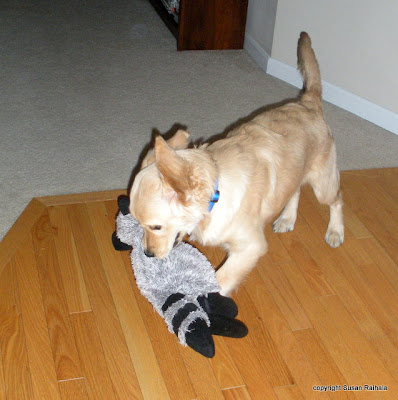 So, Daisy is three in people years and acts just like a three-year-old human, except that she wants to kill the raccoon rather than pet it and love it and call it Stripey. She won't do what you tell her and does what she wants even though you repeatedly tell her not to.


She responds insensibly to ordinary stimuli.

The other night, I had her on our bed while I read and she chewed a nyla-bone. Suddenly, she stood up and stared out the dark window. Then she growled. Then she barked. Because there was a strange golden retriever puppy looking in our second-story window at her!!

Two nights ago, she was on the bed, happily chewing a stuffed lamb that she loves almost as much as the raccoon which she loves almost as much as socks. Suddenly, she noticed that the rowing machine had MOVED! HOW DID THAT HAPPEN?!?!? How dare it move from its proper place tucked under the windows! She growled. Then she barked. And she barked some more, while it sat on the floor, completely unintimidated by her display of puppy outrage.

Last night, she noticed George's long cycling tights hanging from a hook on the wall...where they have hung for months. She growled. Then she barked. Then she curled up next to me and kept throwing dirty looks a the tights, as if to say, "I've got my eye on you!"

She is, undeniably, guilty of unsensibility.

Of course, she's also guilty of being cute and cuddly and furry and funny. All it takes to distract her from anything is to start talking in a high-pitched silly voice: "Come here, Daisy Doodle! Come here! You are the cutest doggie in the world! Oh, how I love you!" A high-pitched voice immediately reduces Daisy to spasms of body-wagging dog joy.

In fact, I'm now convinced that it's evolutionarily advantageous for dogs to be unsensible. It makes us want to take care of them, shower them with love, and dote on them. Besides, all the unsensible moments are more than compensated for by moments like this: 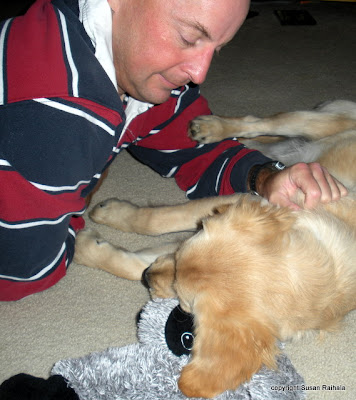 It's a verdict we can live with.
Posted by Susan Raihala at 4:20 PM

Email ThisBlogThis!Share to TwitterShare to FacebookShare to Pinterest
Labels: Daisy