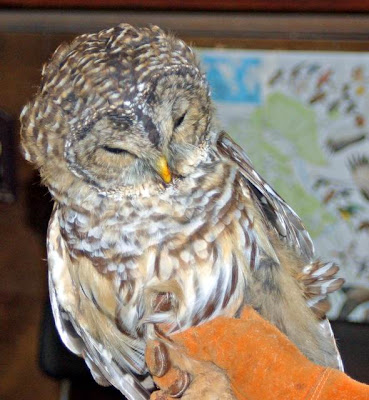 Today, I called the Glen Helen Raptor Center for an update on the young barred owl George rescued in early September. Betty Ross told me he's doing pretty well. He is permanently blind in his left eye but appears to have no brain injury from his encounter with a moving vehicle. He's not flying straight yet (a few weeks ago, he could only fly in circles), but he's improving as he adjusts to having only one eye.

Betty told me how healthy young owls in the wild have an 80% mortality rate their first winter because they are not experienced hunters and haven't yet established territories. Young owls with only one eye have even less chance of surviving. Interestingly, older owls who have lost one eye can be released to the wild and do pretty well because they know their territory, have lots of experience hunting, and usually have a mate to help them.

Our owl is currently in a cage with another injured owl. Someone in the cage is eating live mice, but Betty isn't sure which of the two it is. Perhaps they both are. Next week she will move our owl to his own cage. Depending on how well he does catching live mice over the winter, Betty may decide to release him in late spring. This is obviously the best outcome we could hope for.

If Betty decides he can't be released, she will see that he finds a good home in an educational setting. She assured me he would not be euthanized.

I asked if the owl had a name yet, and she said they don't name them until they are sure they won't be released, but she said if we had any suggestions at that time, she would consider them. If the opportunity does come up, I'll ask for suggestions from you!

Betty appreciated the fact that we still care about "our" owl and want to know how he's doing. I deeply appreciate that Betty Ross cares about feathered wildlife enough to protect and care for them.

I'll give more updates as I receive them.

Posted by Susan Raihala at 6:56 PM