...if it were a Real Education, you would have been called upon to think about something other than No. 2 pencils and bubble forms.

My fourth grader had three rounds of standardized testing in the 2012-2013 school year: fall, winter, and spring. At least five days of instruction time were lost to the actual testing, and I don't know how many days were lost to test preparation. 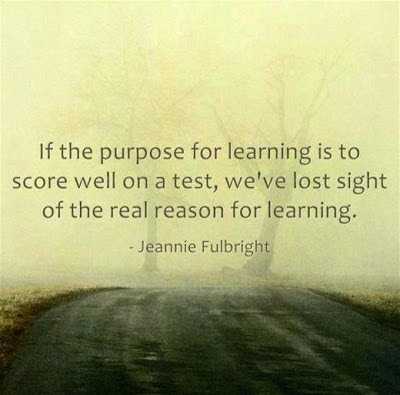 Which brings up some interesting questions. What is the point of education? What is the real reason for learning?

These are huge questions, and people take a variety of approaches to answering them.

1. The practical approach. People who subscribe to this approach view schools as credential-granting institutions. Public schools, then, are designed to equip people with basic skills to be base-line employable. In other words, high-school graduates can read and write at an acceptable level, can do functional math (and maybe a bit more), understand the basics of our culture and government enough to get by as voting citizens (hopefully), and grasp enough science to boil eggs and change air filters on HVAC units.

College, in the practical approach, should give you job skills. Get a degree and become a computer programmer, nurse, engineer, teacher, Ponzi scheme planner, or politician. The curriculum should just teach you skilz, dude.

I had a student who asked, on the first day of Introduction to World Literature, why the university made him take my class because he was going to be an accountant and what possible use could Homer be to him in his career.

I hate the practical approach (and wanted to throw my copy of Dante's Inferno at this student's head), but practicality does, sadly, have a point, and for some people, practical results are all they want from formal education.

2. The idealistic approach. People who subscribe to an idealistic approach to education and learning see school as ivory halls of percolating brilliance, where Great Ideas and the Great Minds that think them are nurtured and encouraged. The point is to teach creativity and independent thinking skills with minimum influence and maximum freedom for students to explore their interests.

The idealistic approach keeps higher education alive by encouraging people to get PhDs in such esoteric subjects as Hispanic Studies or Theoretical Physics or--my personal favorite--Medieval Studies. About all these folks can do to earn a living is teach, which is good as far as it goes, but we don't need a bazillion Medieval Studies professors. When I was in graduate school, everyone was talking about the glut of English PhDs and how hard it was to find a job.

The idealistic approach, as much as I love parts of it, suffers in the real world. It encourages students to rack up $150,000 in college debt while majoring in German Culture Studies. If this student has no intention of going on for a PhD, s/he is in for a world of hurt when those loans come due. You've got to pay the piper, and German Cultural Studies isn't going to get you a job, especially in Germany.

3. The middle ground. Education is a big word that encompasses a vast range of reasons for learning. Yes, there is practical learning...which is necessary and good and can partially be tested with bubble forms. But when we think of education as something we only get in school, we're limiting it ridiculously. What you learn in school should be a springboard to what you learn in the world, outside those ivory towers. School learning should contextualize your experiences, encourage you to seek beyond the textbook or rule book. It should teach you where to look for answers, how to look for answers, and that lots of times, the answers aren't as neat and tidy as we want them to be.

The accountant in my Introduction to World Literature class likely remembers nothing from that class except the torture of reading The Odyssey, but another student learned something important. At the end of the semester, after final grades had been turned in, he told me a bit about himself. He was in his late 30's, retired Army, a criminal justice major, and he was not selling his Norton Anthology of World Literature back to the bookstore.

Say wha'? Most students couldn't wait to trade that book in!

He said he hated high-school English and couldn't remember much else about it. The only things he'd read since high school were Army training manuals and Sports Illustrated, but that my class taught him there is a whole big world out there he was missing. Milton's Paradise Lost spoke to him. He was, on his own, reading the parts of it we didn't read for class. He thanked me for showing him that reading is wonderful and that he could do it.

His words made the entire semester worth all the work I did for a pretty paltry paycheck.

William Butler Yeats said, "Education is not the filling of a pail, but the lighting of a fire." That fire needs kindling in the form of basic, practical knowledge, but without some spark--curiosity, passion,  encouragement...education--those sticks and twigs just sit there.

Once the fire is well and truly lit, however, not much stands in its way, and it will burn for a lifetime. The goal of education, then, should be to light that fire and turn students into lifetime learners.

I grew up watching adults try new things, perfect skills they already had, pursue their interests with enthusiasm. They modeled that behavior for me, and I soaked it in. I loved books and school not just for themselves but for what they gave me: a sense of the universe as a great big book to read, so big we puny humans only ever get the merest glimpse of a few pages...but what beautiful writing is on them!

All this testing throws a pail of water on the fire. It does not stoke the flames.

Lifetime learners don't care about anything as mundane as bubble-form tests, degrees or diplomas. They are curious and confident. Of course they want jobs and paychecks, but that's not the reason for their existence. They know that true education comes from stoking the fire of their mind, and they crave that education until they die.

But then, I double-majored in English and Medieval and Renaissance Studies. What do I know?