Today, I am grateful for Shrimp and Grits made with really good grits that take an hour to cook. George invented his own recipe, which included andouille sausage, tasso ham, and shrimp...a jambalaya of sorts in grit form. Mmmmm.

Today, I am grateful for peace in my heart.

Today, I am grateful the cone is gone from our lives. Daisy has been a bit, shall we say, vengeful since the cone went away, chewing up some socks and a glove and other miscellaneous items left within her exceedingly large reach. But it's wonderful to have her sleeping in our room again, in her smaller crate, and not to be banged up by the dang cone every time she gets enthusiastic, which, because she is a golden retriever, is pretty much any time she's not asleep.

Today, I am grateful for the chaos of a photo shoot with two boys and a puppy. Let's name these photos, shall we? 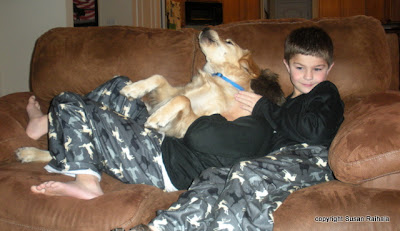 Second, Random Eyes, Cheesy Grins, and I'm Going to Bite Your Knee...Because It Is There. 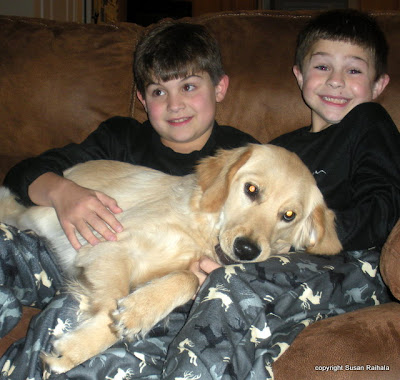 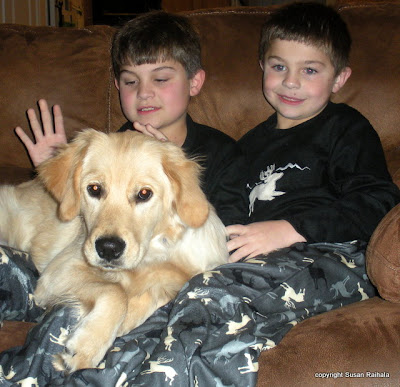 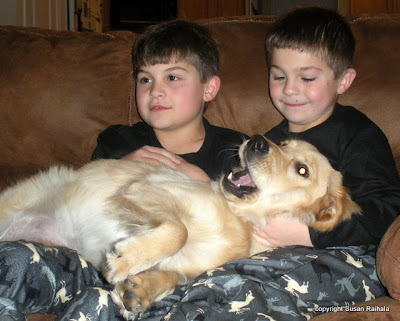 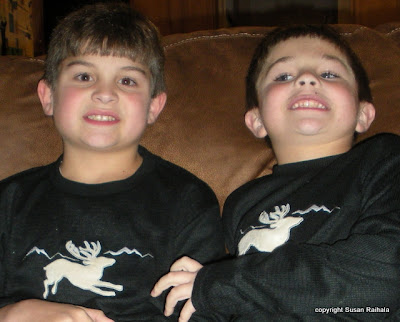 Sixth, As Good as It Gets. I just wish Daisy didn't look so stern and had eyes on me instead of George. It's an unfortunate side-effect of her droopy lips that she looks pained when she absolutely isn't. Perhaps there's some bassett snuck into her very blue-blood golden breeding. 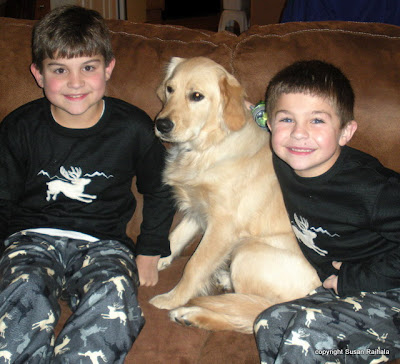 This photo shoot was to celebrate New Pajama Night. Every year, I buy new PJs for the boys and never know when to present them. The day after Thanksgiving seems too early; Christmas Eve seems too late. This year, I had the bright idea of settling on St. Nicholas' Day...the birthday of Santa Claus, which I mistakenly thought was December 5. It's really celebrated December 6, but I figure it was already the 6th in Europe when I gave the PJs to the kids, so that's good enough.

And yes, the pajamas are gray and black. Whoever designs boys' jammies for Target is an idiot. Nothing festive (army green and skulls on Christmas pajamas? What the heck?). These were the least offensive, and I'm grateful there are no skulls on them.

Today, I am grateful for sleeping puppies, who are very easy to photograph. 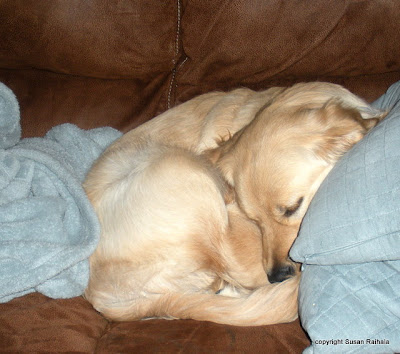 Today, I am grateful for pretty snow that doesn't get in the way of getting around. Thank you, flurries.

What are you grateful for today?
Posted by Susan Raihala at 2:48 PM