George had to attend a dining out for the 50th anniversary and of course he wanted me to tag along. Military parties come in two varieties: fun and "mandatory fun." Dining outs, or military formal banquets, are usually fun occasions, at least when flying squadrons get together to party with rituals, toasts, and lots and lots of alcohol. This dining out, however, was “mandatory fun.” Few of George’s friends were going, and not one of mine.

Oh, joy. Get dressed up and go to the Officers’ Club; eat cold, bad food; converse with strangers; and wait until given permission to go pee after some boring speech about blah, blah, blah.

I’m sorry if this doesn’t convey my deep and sincere respect for the awesome work of the Air Force over its first half century.

For once in my life, I didn’t have a formal dress to wear, having donated the old ones I’d worn for years to Goodwill some months earlier. At first, I didn’t expect to have trouble finding a suitable dress for a reasonable price, but after much fruitless shopping, I realized a reasonably-priced, attractive dress that fit me did not exist in Boise, Idaho, in 1997. The only acceptable dress I could find was almost $400.

Um, no. Just no. I didn’t pay that much for my wedding dress.

So I dug through my closet and found a little black velvet slip dress that George bought at Victoria’s Secret a few years before. I’d never had the guts to wear it out in public because the v-neck plunged rather alarmingly, but it was at least a semi-formal cocktail dress with a pretty—if short—swirly skirt. It seemed the best option at the time.

In 1997, I was in pretty good shape. The dress was a size 4, my boobs were perky but not terribly large (I wore a barely B cup size), and other than my cankles, I rather liked my body.

Still, I wasn’t in the habit of wearing plunge necklines and showing that much leg. I even had to buy a new bra for the dress as my old, strapless bra peeked unattractively out the top of the dress’s neckline. I tried on at least twenty different bras at five or six different stores before finding a skimpy black push-up that wouldn’t show.

Standing alone in the dressing room, I didn’t mind the décolletage. After all, I was saving big bucks by wearing this little black dress.

On the hour-long drive to the base, he kept glancing nervously at my boobs. I decided this was the perfect social experiment: what, indeed, is the effect of cleavage on social interactions with both a spouse and strangers at a formal event?

The answer, which did not surprise me and I’m sure will not surprise you, is complete and total distraction. Even my smallish boobs were enough to distract pretty much every man I encountered. None of them could maintain an interesting line of thought for conversation, and when they could form words at all, they spoke those words to my boobs, which, to my knowledge, completely lack ears.

As you might imagine, I had a blast with my little social experiment because the circumstances were completely safe and secure, and it was particularly entertaining to watch George squirm. He didn’t leave my side the entire night and tried repeatedly to tie his napkin around my neck. Also, he didn’t flinch when, later that year, I purchased a $120 evening dress on sale at Macy’s that had a modest neckline and did not require a skimpy push-up bra. Never again has any man, other than my properly wedded husband, addressed my boobs in conversation.

On the whole, I rather prefer it that way.

Here's a picture from the Christmas party later that year, for which I bought the dress with the modest neckline. As you can see, this party was definitely fun, and not at all of the mandatory type. Also, note how I look boobless. George really liked this dress. 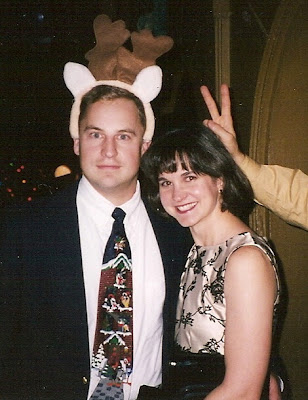