Things on Thursday: Still Life of My Parents' Desk

Having easy-to-use technology means you never know who uses your device and for what nefarious purpose. New apps magically appear on my iPhone and Nook...apps I would never download, such as Marvel Comics and Subway Surf.

Boys and my toys.

So I was not surprised to download pictures from my camera yesterday and find a photo essay (of sorts) snapped by my younger son, who has been home sick for three days. He's not been very sick...just sick enough with a head cold and pink eye not to go to school.

It's always interesting to see what Jack considers photo-worthy. Over the years, we have collected several hundred digital photos of Jack's hands and feet. He also likes taking pictures of rocks, the dog, shows on television, and furniture.

His photography style is unique. He likes shooting from odd angles, moving around in space and aiming his lens at any ordinary thing, finding sometimes brilliant new ways of looking at something entirely mundane.

One of his photos from this week captures a moment in the life of my desk and my husband's desk. This one shot of our messy desks says a lot. Which is sort of scary for some reason.


1. Two computers. Our desks face each other, and every night, we sit at them and do the important work of surfing Pinterest and sharing funny pictures with each other. The screen you see belongs to my brand new computer George bought when my old one crashed. I'm lovin' that new computer. It's fast.

2. My beautiful Mother's Day pop-up card from George. It's different from his hand-made Mother's Day cards, which have occasionally featured a stamp of a B-1 bomber. I delivered two payloads of bouncing baby boy, and George well remembers how both of them were dropped when he was sleep-deprived from flying that bomber. I love those handmade cards because he makes them.

But I also love the water lilies and dragonflies of the pop-up card a whole lot. And the glitter. Ohmygosh, it has glitter! George bought the card at the Dayton Art Institute, where his team from work went for a day of enrichment and fun. George isn't exactly the type of person who uses the words art institute and fun in the same sentence (unless there's a not thrown in). But he actually really enjoyed the day spent looking at art, which goes to show the value of breaking out of your comfort zone every now and then...although I think it unlikely I'll get him to the Dayton Ballet's next performance. Nevertheless, he enjoyed his day at the Art Institute and bought me a cool card. Thanks, honey!

3. Two phones. Yes, we're still hunting wooly mammoths and using a land-line phone, which should be in the cradle in another room, but there it is on my desk. The iPhone in its purple case will win the phone war hands down simply because it's the coolest gadget I've ever had in my formerly Luddite hands. Eventually, we will get rid of the land line. Very eventually. Two-timing is easy, but breaking up is hard to do.

4. A single K-Swiss running shoe, size 9.5. George is the Imelda Marcos of triathletes, at one point hoarding owning 36 pairs of running shoes. That's down to about 12 pairs now. He couldn't get rid of the old ones ("They make great grass-mowing shoes!") so he had me cull the collection a few years ago.

When you have a man who never puts his shoes away and a golden retriever who must! retrieve! when! excited!, then you end up with random single shoes spread all through the house. Daisy brought this one to us when George came home from work, and she moaned and whined and wiggled her joy until he took the shoe out of her mouth and placed it on the desk.

Because, of course, that is where it belongs.

5. A copy of Diana Gabaldon's Outlander. That's the paperback I use to prop my computer. When the computer is flat on the desk, I hit the touchpad constantly and unpredictable things happen that make me say bad words. I looked into buying a tilt-board for the computer but can't bring myself to pay for what a fat paperback does for free.

6. My ergonomic mouse pad. I just glanced at it. It's filthy, which means that I have really dirty wrists. It does NOT mean I spend too much time at my computer.

7. My camera cable. I use that a lot to download pictures of cards for my stamping blog and pictures Jack has taken of his feet.

See what I mean? 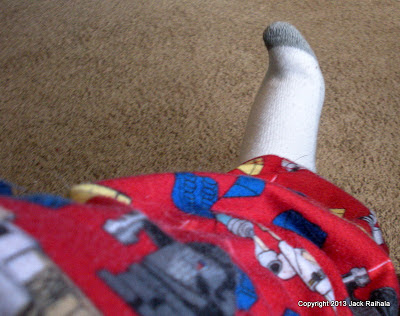 8. A pile of papers on George's desk that have been there for about six weeks. I know this because the pile coincides with his new job, which started on April 1.

9. A box of Kleenex and a notebook. Pretty self-explanatory.

So, what is on your desk? Are there any stories in the detritus of your workspace? Do tell!
Posted by Susan Raihala at 9:16 PM