When I first started this blog, I thought I would write a lot more about books. Somehow, channeling my inner Erma Bombeck has been loads more fun, but it gives the false impression that I’m, you know, actually funny. George and my mother can assure you I am not nearly so funny in real life.

I’m not funny. I just write that way. (Name that movie I’m paraphrasing!)

In real life, I am an unapologetic geek. I’m the weirdo in Bible study who pipes up with trivia tidbits like how as the bishops gained authority in the 8th and 9th centuries, they sapped the power of abbots and abbesses—especially the abbesses. Or how the popes saved the fish industry in Italy by declaring Fridays meat-free.

You know. That geek.

Anyway, in a past life, I was either a librarian at Alexandria (2nd century B.C.), a monk at Lindisfarne (7th century A.D.), a professor in Paris (14th century A.D.), or a Quaker rhetorician (19th century AD). Or perhaps I was all of the above. So it’s only logical that from the beginning of this life books have riveted my attention even when, perhaps, I should have been doing something else.

In school, books were my world. I knew that the secrets of life, the universe and everything lay hidden in them, and school provided the perfect excuse to juggle many books at one time. History, math, chemistry, biology, physics, novels, grammar handbooks, poetry, foreign languages…such diversity of subject matter challenged me to soak it all in, and I accepted the challenge joyfully.

This is why I know so much about classical, medieval, and Renaissance history despite the fact that most history classes are, generally speaking, mind-numbingly soporific. I can remember sitting in eighth grade history telling myself that surely there had to be something interesting about the Hittites; the text book just missed it. Maybe if I kept reading, I’d figure it out. No matter how boring the book, I shuffled through, made good grades, and never once understood why other kids had lost hope that the Hittites were anything but pointlessly boring dead people.

My faith in books stands unshaken, but my ability to multitask with them significantly declined when I had children. For the last ten years, I have rarely had two books going at once, unless, of course, I had already read them before. I reread books, having lunch with them as if they were old friends. It takes less mental energy to reread a book than it does to read it the first time, which is perfect for someone suffering from Mommy ADD.

I hoped when I started this blog that I would regain some of my powers of concentration and can happily report at least partial success. Right now, I am reading four different books, none of which I have read before. If you’re a fellow geek, you know just how cool that is.

Here they are, in case you’re curious. 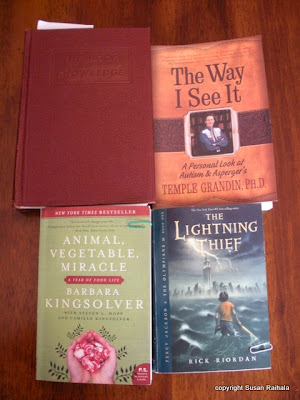 The red leather-bound book is Volumes 1-2 of the 1950 edition of The Book of Knowledge, a children’s encyclopedia. Why, you might ask, is the 43-year-old geek reading an old children’s encyclopedia? To prove just how geeky I am, I guess. It’s an old book and smells of knights and Natives and oh!my!gosh! Geoffrey Chaucer! There’s a whole big entry on medieval literature, complete with anachronistic Victorian engravings and a fairy-tale retelling of Beowulf. It has articles as diverse as “The Wonder of the Train”; “The Artists of the Old Empires: Egypt, Babylonia, and Assyria”; “How to Renew the Edge of Your Screwdriver”; and “Birth, Life, and Death of a Plant.” It even has a poetry section with the following poem by Amy Lowell:

The Way I See It by Temple Grandin contains mini-articles about autism. Grandin has a PhD in animal behavior and her own consulting firm that works to improve the conditions of animals raised for slaughter. She also has autism and writes with the authority of one who’s lived it. The Way I See It gives advice to parents and therapists on how to help their children with autism learn and mature to be useful contributors to society rather than warehoused and written-off disabled adults. I’ve always appreciated her unique point of view and find the tidbits of advice in this book quite useful.

Animal, Vegetable, Miracle tells the story of Barbara Kingsolver’s attempt to get closer to the food she eats. Another volume in the increasingly popular genre of do-something-weird-for-a-year-and-write-a-book-about-it, Animal, Vegetable, Miracle gives lots of interesting information about food: where it comes from, how it’s grown, how unnatural it is to eat asparagus in October. A bit preachy at times (I won’t stop eating asparagus in October), but an enlightening read nevertheless.

Finally, a volume of children’s literature caught my attention at Christmas so I bought it for Nick. The Percy Jackson series taps into my lifelong love affair with stories of the Greek and Roman gods. Unlike the Harry Potter series, these books are definitely for children, written in the first person from young Percy Jackson’s point of view. Percy has ADHD, dyslexia, and impulse-control issues. He’s also the half-blood son of Poseidon and a mortal woman who is tasked with saving the Olympian gods from total destruction. I wanted to read the book before seeing the movie, which comes out in February.

When I finish the Percy Jackson series, I’m going to dive into Ovid’s Metamorphoses. I read parts of this Roman classic in graduate school but never the whole thing. There’s something appealing about reading stories of transformation when I’m trying to transform myself. Of course, I’d rather not transform into a tree or have my liver plucked out daily by a giant eagle, but I’m sure you know what I mean.

It feels good to get back to normal (for me) with books. What is normal for you? Do you juggle multiple books or focus on one at a time? What are you reading right now? Chick lit? A book on raising designer chickens for fun and profit? The Bible? A how-to book on belly dancing? A children’s encyclopedia? Please share!

While you're thinking, I'll just go check the edges on my screwdrivers to see if they need tending. Who knew screwdriver edges were an encyclopedia-worthy topic? You learn something new every day....