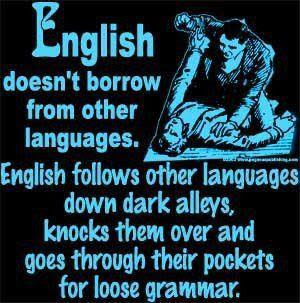 English is a bastard of a language, isn't it? Or perhaps we should think of it like the Borg...assimilating all the interesting grammar and words it finds while roaming the galaxy.

Grandeur, along with a lot of other French words, does, in fact, appear in the Oxford English Dictionary.

According to the OED, several attempts have been made to Anglicize the spelling, but because of its relatively late adoption into English (most French words were assimilated into English between 1066 and 1400), the French spelling remains.

A random and quick dig into the G section of the OED yields the expected high number of words with French, Old English, and Teutonic/Germanic origin...just what you'd expect from a language that started as an off-shoot of German and whose speakers were conquered by a Norman bastard who imposed his own language onto them in 1066.

By the way, the Norman conquest explains why our words for farm animals are from Old English (cow, pig, chicken) but our words for the meat are French (beef, pork, poultry). The Old English peasants worked with the animals, and their Norman French overlords ate the meat.

Without even looking hard, I found plenty of Latin and European words (Italian, Dutch, Irish, Celtic, Norse...though surprisingly no Spanish). Greek, of course, cropped up frequently. But I also found Australian, Tonga, Hindustani, and Persian words.

The result of all this theft/plunder/borrowing is a rich and complex language that tells a story all its own.

We word nerds truly have plenty to keep us busy for several life-times. What a gift never to be bored! Just get yourself a copy of the OED and start plundering.
Posted by Susan Raihala at 9:33 AM